This is a review I should have written a while back. Though the album is fairly recent,  I was privileged to get a review copy from the artist early in the production process. I was so positively stunned by the album that I fear that not having reviewed it sooner is one thing I’ve had to think about during Elul. Better late than never, here is my review of Joe Buchanan’s “Unbroken.” 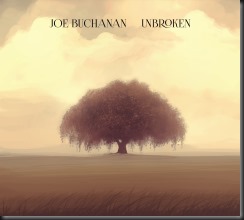 Run, do not walk, to download or order your copy of this incredible album from a new face on the Jewish music scene. I was privileged to first be introduced to Joe’s music (and to Joe himself) at the NewCAJE Conference in 2015 in Hartford, CT. He’s a solid yet gentle presence. He’s a true mensch.

Joe self describes his music as “Americana – with a Jewish soul.” What I love about that is there’s no maudlin, sentimental, chassidishe, Ashkenazi, S’fardi, Mizrachi, and other typical Jewish tropes required to imbue these songs with their Jewish soul. This is a quintessentially Jewish album. It is also a quintessentially American album of music. To me, it doesn’t feel like typical American folk/rock tropes twisted and massaged to fit liturgy and Jewish themes. It’s not “Christian Country/Rock/Pop” co-opted to serve in Jewish settings. These songs seem to organically grow from within Joe’s soul. (If you want to know more about what led Joe to becoming a Jewish singer/songwriter, check out his Bio, here.) Yes, some of the songs use bits and pieces of liturgy. However, I get the feeling – though I could be wrong about this – that Joe didn’t always set out to write, say, a setting of a particular piece of biblical or liturgical text.. On some songs it feels the other way around, as if the melody and lyrics of the songs found their ultimate expression when they were combined with the words of some well-known piece of liturgy or Jewish text.  I hope this is true for, and I wish more Jewish songwriters would write that way – sometimes without a particular intent to write a song about a particular piece of liturgical or Biblical text. That is just so refreshing to me. Even if I’m wrong about his process, there’s little doubt that what Joe has written here is coming from deep inside of him, and is profoundly intertwined with his understanding of his Judaism. Yes, the album starts off with a Shalom Aleichem, but I guarantee it’s different and distinctive enough from any other setting that it’s worth the time to listen and sing along once you’ve learned the melody. Yes, the next song is  a version of “Sh’ma,” and perhaps Joe really started out to write a setting of that text, but  again, trust me, and just listen. Plus it has a (possibly too long but) amazing instrumental . “Repair” is an upbeat take on tikkun olam. The first time I listened to it, I thought that maybe it was trying to connect too broad a spectrum of ideas. The more I listened and thought about it, I saw it as a refreshingly different take on how we can be motivated to engage in tikkun olam.

The title song, “Unbroken” is Joe’s telling of his own story of the  path that led to the one he is on today. Joe has a strong, powerful, compelling voice, and it is showcased to its best and highest abilities in all songs but one. The vocal on “Elohai N’tzor” feels a bit raw and gravely (possibly intentional given the song’s source, but enough to feel just a little bit off. All that notwithstanding, this is a truly effective use of the words and spirit of this usually silent prayer. (Rabbi Stuart Federow wrote the lyrics for the song.)

“Sing” is a song that challenges what I wrote earlier about Joe’s songwriting process. It is a truly beautiful song, however I had a little difficulty connecting the English verses to the Hebrew chorus of Shiru L’Ad”nai, even introduced as they were by the word “sing.” The words of the song are deeply meaningful in and of themselves, and the chorus is pretty, but I felt a bit of a disconnect.

Of all the songs on the album, “Return” has the chorus with the best hook. (Disclaimer: I just finished transcribing this song for Joe, in time for use at High Holy Days.)

“River’s Niggun” will challenge your pre-conceived notions about Jewish niggunim, Way to go, Joe. Next is a song written by the album’s producer  Saul Kaye, “Hineni.” It fits in really well with the rest of the songs, and I love how the almost New Orleans second-Line-esque rhythm drives the song forward while at the same time holding it back just that little bit-enough to make you think.

I dare you to not sing along with “Modeh Ani.” Sure, here Joe set out to write a “Modeh Ani.” Doesn’t stop it from being fun. “A Joyful Noise” takes us off in another American musical direction. I could see it becoming a real crossover piece. I know which American artists this song reminds me of, and I’m sure you’ll find one too, even if it isn;t the same as mine.  “Sarah Laughed”  is a truly thoughtful bit of songwriter. “Home” is almost a continuation of the story Joe started telling in “Unbroken.” It’s a setting of “Etz Chayim Hi” but it’s so much more. The album concludes with the haunting “We Are Here” showcasing yet more of Joe’s journey.

I find people, myself included, often have a negative view of the derivative nature of music. How often do we find ourselves saying, almost mockingly,  “that reminds me of..” or “that’s just like…” In the case of this album, I want to state, categorically, this this is a good thing. A great thing. That Joe’s songs raise memories and connections to other songs doesn’t in any way detract from them – for me, it actually makes them better. They stand on their own, they’re not dependent on their stylistic antecedents, and in this case, the familiarity works. I won’t share what songs I hear in my head when I listen to each cut on “Unbroken.” (Some of them, truth be told, didn’t evoke an antecedent.) I suspect each of us may hear different antecedents, and make different musical connections. Joe has absorbed the essence of a wide breadth of styles that fall under Americana and, building on that great tradition, crafted amazing new works.

Though I feel some of the songs on “Unbroken” are performance pieces, and others are more suitable for use in worship services and other Jewish settings, I won’t comment on which I think are which, as it’s not my place to judge what anyone finds suitable for use in any given situation.

I’ve commented before on the often sorry state of production values of Jewish albums. Luckily, things have been getting much better lately. Home studios are great, but there’s nothing like a real studio with experienced engineers. This album is well produced and well-engineered, and made at Berkeley, California’s renowned Fantasy Studios. I can’t help but feel that many of the great artists who have recorded there in its long history have contributed a bit of their magic, their vibe, to this project as well. Kudos to the guiding hand of producer Saul Kaye, and the incredibly talented musicians and engineers that assembled this project.

“Unbroken” CDs are available at https://JoeBuchananMusic.com/Store.

and from other digital retailers.

copyright ©2016 by Adrian A. Durlester

Posted by migdalorguy at 9:21 PM