In the pipeline are reviews for the latest offerings from Steve Dropkin, Rebecca Schwartz, and a first release from Adam Bellows. Stay tuned. Be sure to read my review for Sababa’s Shalosh.

Posted by migdalorguy at 5:24 PM 0 comments 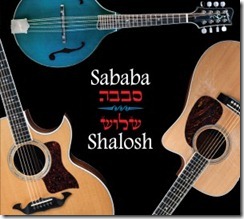 Sababa has a new album out, their third, appropriately entitled Shalosh, and right at the start I’d like to give it a hearty recommendation.  On it, you can expect what Sababa has become known for: rich vocal harmonies, great arrangements, and solid musicianship. Sababa’s three members - Steve Brodsky, Scott Leader, and Robbi Sherwin are good songwriters, singers, and performers – and it shows.

If you’ve read any of my music reviews before, you know I can be picky and demanding. Also opinionated. I am very much from the “if you’re going to write yet another version of a piece of text for which there are already a few great settings, a few good settings, and many more mediocre and less worthy versions, at least strive to write something that sets it apart and puts it in one of those first two categories – good or great.”

So I was already starting out with a bias when I saw that this latest project from Sababa,  contained a lot of familiar titles. This is intended to be a positive review – I like and I am strongly and wholeheartedly recommending this CD -  so I don’t want to create an erroneous impression with the comment that none of the new songs which are settings of texts for which we already have enough settings are likely destined for greatness. However, this may not be the right criteria by which to judge. I don’t think that’s why Steve, Robbi, and Scott write and record-I think there’s a higher purpose, one that I would hope that all the folks out there writing and recording Jewish music are serving.   Whether or not any of these songs get adopted for use in services (and I am sure some will, in our never-ending search for new and fresh music for worship) they are all worth your time to give a listen, and I think you will enjoy and like them all. In this category of new settings of standard liturgy, the trio gives us new settings of “Am Yisrael Chai,” “L’cha Dodi,” the “Priestly Blessing,” “Adonai Oz,” “Modeh Ani,”  “Hariu l’Adonai.”  and “Eliyahu.”

“Am Yisrael Chai” has a stellar a cappella opening, and turns into a pleasant, engaging rock-pop song. The rockabilly style “L’cha Dodi” is fun for listening and singing .  (Rabbi Joe Black ably provided the banjo used on this track. It’s not a Mumford and Sons style driving banjo, but it enhances the song nicely.) “Priestly Blessing” with lyrics by Rabbi Joe Black and music by Robbi Sherwin, provides a fascinating translation of the text set to a elegant arrangement that builds nicely. “Adonai Oz” is a lilting melody with just the right hint of metric dissonance, and a really pretty piano accompaniment by Scott, who is a fine keyboard player.  “Modeh Ani” is fine listening even if it does have the far-too-overused cliché saxophone fill. (I’ve just gotten “saxophoned-out” after decades of every producer using it! But that’s my bias. You might like it.) “Harui l’Adonai” is an enjoyable little pseudo-Motown-Rock Gospel setting that will have you joining in.

The song “K’doshim,” doesn’t exactly fit in this category, as it’s not truly liturgical. However, it is based on a relatively familiar piece of text from parashat Kedoshim, so that’s why I sort of include it in this grouping. As such, it is the most compelling of the songs that fit in this category. I absolutely love it, and it is inspiring, in whatever setting you find yourself.  (I have to add the disclaimer that I am cited in the liner notes of this song.) Finally, there’s “Eliyahu,” a happy, harmonica-driven romp. You’ll enjoy it as part of your Havdalah or just about any other time.

Now, as to the songs which aren’t settings of familiar texts, there’s a great variety, which illustrate the trio’s many songwriting skills. “Precious Possession” isn’t really unfamiliar to me, and perhaps not to others – it comes from Robbi’s solo album “Aish Hakodesh” and has a very personal connection for me, so I would love this song in just about any setting. This new setting has a truly stellar arrangement and is a real gem. “Gam Zeh Ya’avor” is an appropriately uplifting song to convey the thought that “this too shall pass.” It’s a message we all need to hear, and it’s capably delivered in the hands of Sababa. Not much more needs to be said about the cover of the Bo Porter’s bouncy rock-a-billy “Hearts Full of Love,” except that it features singer/songwriter Noah Budin. His performances are always infectious. Smart move, Sababa, to add Noah’s considerable talents and passion to this project.

There is one real stand-out track for me. The final song, “We Remember” is beautiful and haunting with just the perfect accompaniment. Sadly, it’s the shortest cut on the album. Robbi wrote it after the death of her mother, and it was intended as a short transition piece at the end of the recitation of the Kaddish Yatom, to allow for a less jarring transition than the one that often occurs at services into announcements or whatever, which is why, Rabbi explains, it’s as short as it is.  Nevertheless,  I’d love to hear this song in an expanded arrangement, perhaps with additional lyrics and instrumentals, although it is quite poignant just as it is – and maybe that’s the point!

As I said at the beginning, one reason for that is the talent of Sababa’s three members - Steve Brodsky, Scott Leader, and Robbi Sherwin. The situation is greatly enhanced by the fact that band member Scott Leader is also a really good recording engineer and producer, and this album exemplifies his penchant for high production values and standards. As on their previous two albums, the mix of songs allows all three band members to show off their skills and talents. And these talents are considerable and shouldn’t be overlooked. And that’s more than enough reason to recommend it.

So here’s the thing. I like this CD. I recommend it. This album is a fun and pleasant listen. And I don’t mean to be damning it with faint praise (or feint praise, for that matter!) I can’t say with any certainty that any of the new settings of traditional text on this CD will become new standards, or even hits (though some just might.) I can’t say with any certainty that any of them are destined for the greatness that is reserved for precious few songs, though one can never know for certain. They are all the product of talent, passion, and love. That makes every one of them is listen-worthy, and gives them the potential for greatness. I’ve learned to listen to songs (and to all music) in the same way we are taught to think about people – that any one we encounter could be the messiah.

So buy this CD if for no other reason than you will enjoy listening to it – and not just once. Listen to it and let the music all around you and inside you. Who knows in which track you might find your musical equivalent of moshiach!

Here’s where to hear some samples, and where to get it:

Posted by migdalorguy at 3:22 PM 2 comments